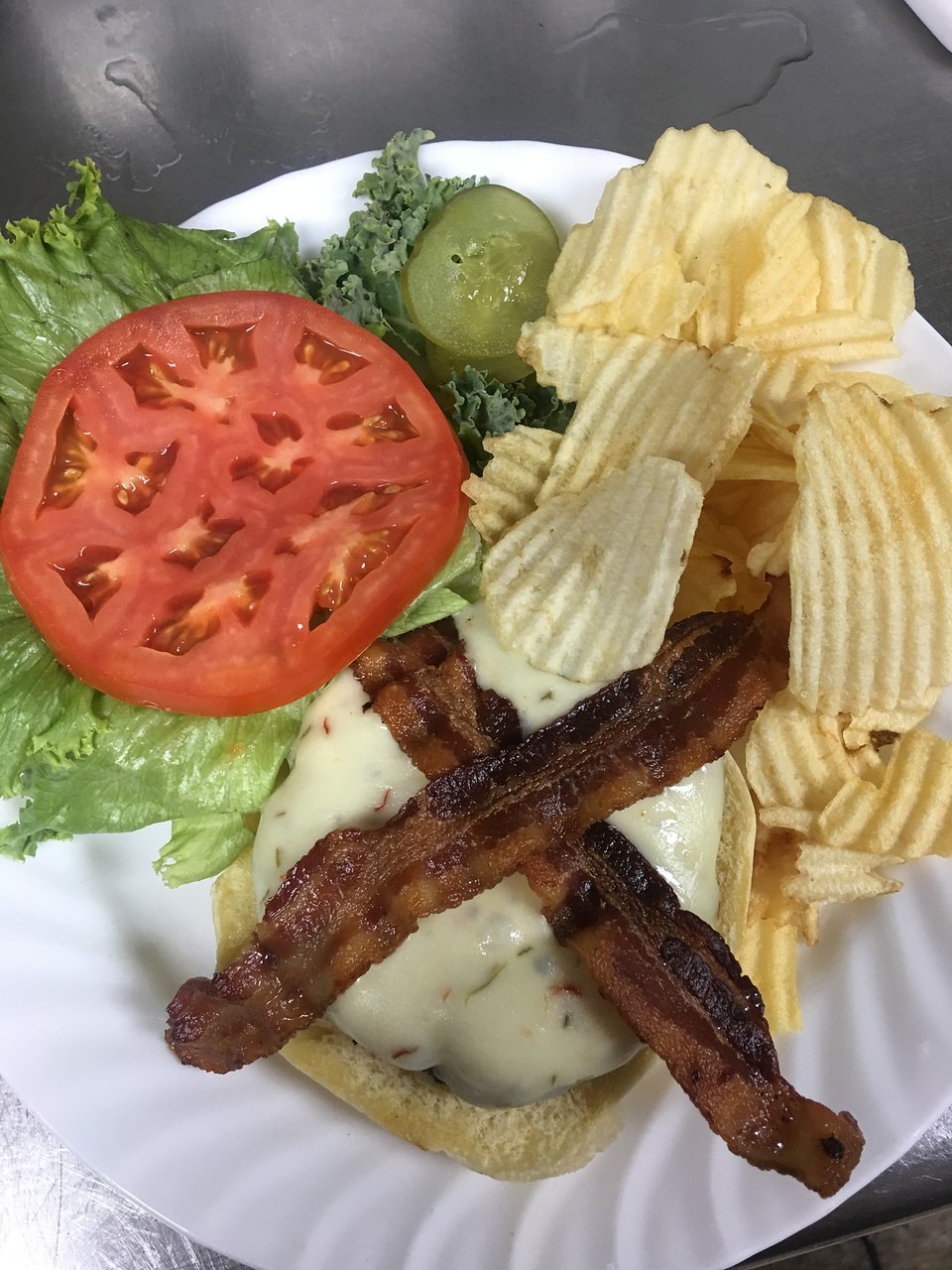 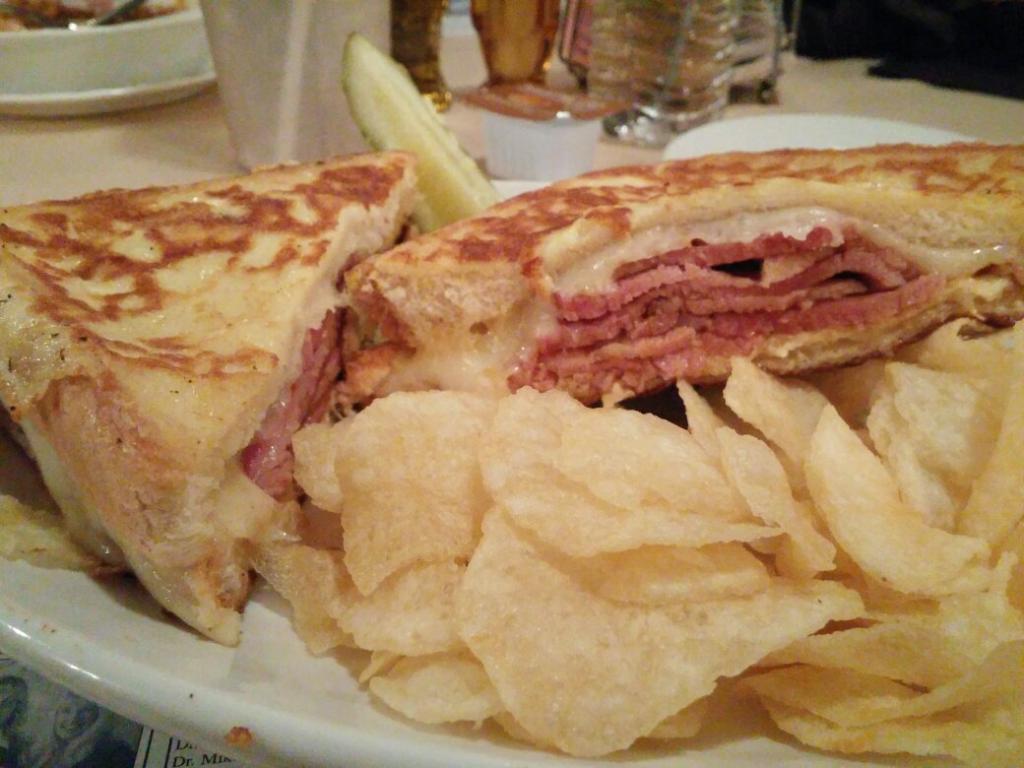 Are you open Easter Sunday?

I would call since the New Owners took it over.

Are you going to have a St Pattys Day buffet ?

I don't know I never ask but I would call in case you need RSVP. Enjoy

The best liver and onions that I have had in years

Great food .. Its an iteresting place to check out.

Great service. Great food. No pickles in my salad please

I had the turkey dinner,not enough portion and tasted like it was from Thanksgiving in 2017!!!!

Very clean restaurant. We had very good food and the staff was very friendly and very attentive. We will certainly be eating there again.

The food was fantastic. The prices were very good for the food that we received. The staff were friendly and were constantly checking on us.

You can get everything from reasonably priced family style meals here, to exquisite and expensive meals you'd find at a high end restaurant. I got the best club sandwich I've ever had here.

Found hair in my bacon wrapped scallops. I called to complain only to be told to call back tomorrow. Are you serious?! Never again will I eat there.

Thank you for helping us celebrate my mom's 80th birthday! Everything was great!

This is a good place to have a filling lunch at a sit-down establishment. Service was quick and the food was delicious. We had burgers.

Me and my husband stopped there for dinner on the way back from bedford.The appetizer was very good.The meals we got were delicious also.I would recommend this place to everyone.

Ordered steak salad. Steak medium. It was burned. I get no peppers or onions. Had lettuce and very little tomatoes. Lousy. I always loved thier salads. Very disappointed. Service was great though. Think her name was Kendra.

Had the Shrimp Alfredo and Mac and Cheese. The Alfredo was good with the garlic bread. But the Mac and Cheese was not so good. Would like to try some other sides and dishes when I return.

Food was good, service was a little slow as far as getting our food out. Waitress was very good. Have been going there for years, usually always good but it's getting to be a little to pricey.

Great place to get together and catch up with friends. Great burgers

Our waitress was very dishonest. Asked if I could substitute the side chips for a salad, she said yes. She brought out my salad and then my meal later, she put my plate of the table and said “They gave you chips anyways” when she brought the check, it had the salad added to the bill, I asked her “I thought this was a substitute” she said “No, it’s an upcharge” which was a LIE because an “UPCHARGE” is typically LESS than the regular price but she charged me the whole price. What should have been a $8.00 meal was $12. 1) she said I could substitute 2) said “they gave you chips anyways” which acknowledged the fact that I wanted to substitute. 3) told me it’s an “upcharge” but still charged FULL price for the side salad

This place makes me think of the quote of This is what happens when a dive bar owner takes over a fine dining establishment. The wings were good but the steak and seafood was absolutely horrid. The waitress however was awesome, and was well compensated for the wonderful attitude. Don’t hold them accountable for the actions of others, only themselves.

The food has always been good and very friendly service

Burger was great. Just wish they would not have changed Steak salad

Really good food but they're a bit under staffed. The waitresses where polite and doing as much as they could be expected to do.

We are huge fans of the French onion soup.

5 star menu and prices, 1 star food. Bacon wrapped scallops we're frozen boxed probably from Sam's Club and over cooked.Prime Rib on the Prime Rib salad was the worst I have ever had. Cook should have said they were out of Prime Rib before serving that. Hot roast beef was on par with most diners, but not what you would expect for the price. Wait staff was frendly and efficient, not their fault what comes out of the kitchen.Drinks and atmosphere were good, would suggest eating some where else.

Not very good food,Got wings they didn't toss them in the sauce they dumped the sauce right in the middle all clumped up.They aren't worth 11.95.I do not recommend.Will not return,The steaks are 24.-27.$ little ridiculous for a bar.oh and the spinach dip was awful bread was not toasted was just cubed up and dip was sour tasting and very cold.Was like something out of a jar or frozen..🤢

3 of us went and no one like their meal. Way over priced for the quality of food you get.

Service gets 5 stars! But food gets 2. & I'm being generous. Got the JUMBO wings for $11.95. First off, there was nothing JUMBO about them. Secondly, they were overcooked & could barely taste old bay seasoning. & lastly, $11.95 is way too much for these JUMBO wings!

The looks are not so great on the outside, but the inside is warm and welcoming. Good food and sweet people. I'm glad we stopped.

Most of the group I was with enjoyed what they had, but my brother in law and I ordered the prime rib and it was crappy.....it was as if it was cooked 2 days in advance and they warmed it up in the oven! Not a good showing for a place that is supposed to be known for it's PR! That was a hard bill to swallow.

That's some good cheesecake. Going back for sure

Very calm places w a good menu and planty of fried choices on the menu. My face is tingling and I need a nap. The zucchini planks are good. They have beer and restrooms. Get your liquor without ice. Don't go at night.

Been going here for 15 years. Went on father's day thinking it would be a nice place. It was the worst a have been too. We had five people and not one of us was happy. Two got turkey dinner. They could not even eat it very little turkey. Three of us got stuffed crab Hancock with shrimp. No crab and the shrimp was raw. Sent all three shrimp back came back still raw. There where only three other tables besides us and two waiters. They hardly every came to our table. I ordered coffee it never came till after I was done with my salad no refill. Will never be back . They said it was under new ownership. New owner needs to learn how to run a restraunt. I will be sure to tell everyone not to go here.

I love everything about This restaurant the menu is something for everyone. The food is so good every time the service is great and the employees treat you like family. It doesn't get any better than this...

Steak was to perfection atmosphere was great price was good

The food is very good and priced Right

I have to stop by regularly for their salads. Why, because of the homemade Red Roquefort salad dressing! They have a large menu of great items, separate bar area with booth seating too. Consistent-that's what keeps us coming back!

Fabulous place to eat!! From prime rib to seafood to burgers, etc. Plus they have a nice roomy bar, to have a few drinks n watch a game. Great atmosphere and the food is very yummy! !

Your question has been sent.

Your review has been submitted.

Want to order over the phone?

Thank you for being with us!

We will call you back!